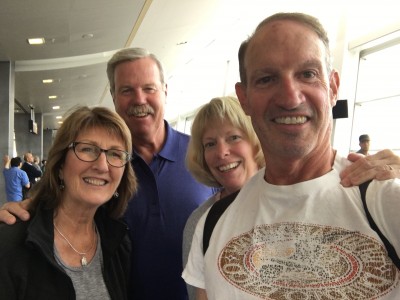 Dizela, Roger, Jill and Henry at the airport waiting for our flight.

As chronicled in my 2013 blog, Jill and I spent two weeks cruising the canals of Bourgogne (Burgandy), France with our friends Rich  and Dawn Davis.  We enjoyed that vacation experience so much we decided to do it again in 2018.  This time our traveling companions are Roger and Dizela Moore.  We have done several boating trips with Roger and Dizela, including a three week Barcelona to Athens cruise and a trip to Victoiria, BC on our boats.

On our first canal boat trip to Burgandy, we had done a round trip route starting and ending in Digoin, France.  During that two-week trip, we traversed 128 locks and covered a lot of territory – usually spending 7 or 8 hours per day moving on the boat.  This time, we decided we wanted to take a much more leisurely approach whereby we could explore more of the villages and attractions, travel just one-way, plus cut down on the number of locks.  While we enjoyed hand-cranking the 18th century locks’ sluice gates at first, after 128 locks it became rather tedious.  So our route this trip was to be from Homps to Carnon France.  Unless you are a local French native, you have probably never heard of these small towns, but they happen to be where the boat rental company has bases.  Homps is just east of Carcassonne and Carnon is close to Montpellier.

We had been planning this trip for about a year and by the time we departed Seattle on September 11, 2018 all the arrangements had been finalized.  We are renting a Tarpon 42 from Les Canalous, otherwise known as Canalous Plaisance of France.  We had used this company previously for our 2103 trip and we liked the boat, the service and the pricing value.  On our previous trip we rented a Tarpon 37, which was adequate for two couples.  However, on this trip we elected for more space and moved up to a Tarpon 42.  The Tarpon 42 has three state rooms and an extra head, so we figured this would give us more storage space, plus a spare bathroom should anything happen to one of the other bathrooms.

We were all flying together on a Delta flight from Seattle to Paris leaving about 1:15 in the afternoon.  Jill and I departed Bainbridge Island on the 9:40 ferry and, as I have been known to do in the past, I proposed to Jill that we play a little joke on Roger and Dizela.  About 11:00 AM I sent Roger a text stating that Jill had forgotten her passport and we were heading back to Bainbridge on the 11:25 AM ferry to get it.  Roger texted back  “Think you will make the flight?”.  I responded with “Probably not.  We are talking to Delta”.

We had been worried that Roger would immediately suspect a hoax upon receiving my first text, but with his response we knew that wasn’t likely.  W proceeded to the gate where lo and behold, Roger and Dizela walked in and found us.  Luckily they were good sports about the joke and were admittedly relieved to discover that they would not be flying to France without us.  We had a few moments of rehashing and laughter, but then I concluded that the joke had gone a little too far.  After all, we might have a case of the little boy crying wolf someday, where they wouldn’t believe us when we wanted them to.  We also asked ourselves what would have happened had Roger and Dizela delayed their own flight by some happenstance as a result of my text?  So I learned my lesson and I won’t be repeating this stunt.

Our non-stop flight to Paris was uneventful.  Jill and I managed to get a few hours of sleep, while Roger and Dizela stayed awake the entire trip.  We landed at CDG slightly ahead of schedule due to a 110 mph tailwind.  French customs was a non event.  We each received a quick stamp in our passport without a single question being asked.  After a several hour layover, our Air France flight landed in Toulouse about 3:00 PM.  We took the handy metro to the hotel in the center of downtown Toulouse.  Everyone but I elected to take a short nap, then we met in the hotel lobby for our first glass of French wine.

Next, we headed out for a brief walk to find a restaurant.  We passed several restaurants where we inspected the menus, then elected to back-track to a rather large, open-air sidewalk restaurant advertising paella for 11.90 euros.  Anyone who knows me well knows that I consider paella to be a perfect meal.  As we sat down to order, we learned that the paella was only offered at lunch, so the had-written reader board  was a false advertisement.  Oh well, there will be plenty of other opportunities, I’m sure. 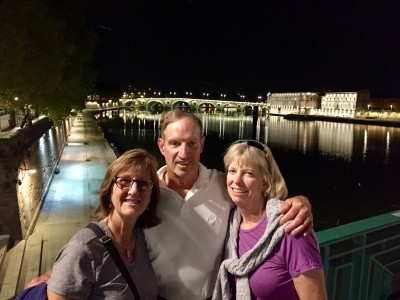 Dizela, Henry and Jill on the banks of the Garonne river in Toulouse.

After dinner we went for a short stroll to the River Garonne, then back to the hotel.  Jill and I collapsed into bed about 10:00 PM, thoroughly jet-lagged.  We slept like proverbial logs.