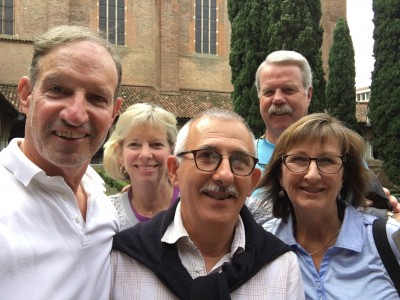 Although our boating trip was to start on Saturday, we elected to arrive in France a few days earlier to get acclimated and to do a little sight-seeing. We also conveniently connected with our French friends (introduced in previous blogs), François and Nicole, Gilbert and Marie José and their adult children. François and I have been talking weekly via Skype for about five years now. He to improve his already quite good English and me to improve my French. Over this time we have come to be good friends, as we share many interests and have much in common. 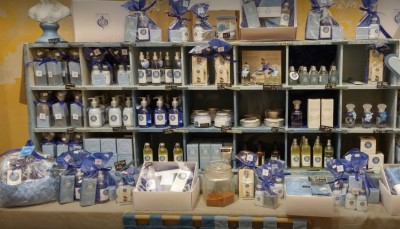 While Jill and I had visited Toulouse previously, this was the first trip for Roger and Dizela. After a well provisioned and tasty breakfast at the Ibis Styles Toulouse Capitole hotel, François met us about 10:00 AM to take us on a tour of the old “centre ville” of Toulouse. We visited a medieval cloister and various other historical sites. We shopped at various little boutiques including a “Pastel” shop. I had always thought that the word “pastel” referred to soft colors in general, but we learned that the original pastel was actually just a soft blue color that was very highly prized during the Middle Ages. Curiously, the pastel plant actually produces yellow flowers, but when cloth is soaked in pastel flowers, the cloth turns light blue. We learned that the pastel trade made Toulouse a very rich town during a period of the Middle Ages. In fact, I learned that a French expression “Pays de Cocagne”, which means” Land of Plenty” derives from the wealth and abundance that came from the Toulouse pastel trade.  For lunch, Nicole was able to join us at an outdoor Italian restaurant in the medieval Place Saint-Georges. 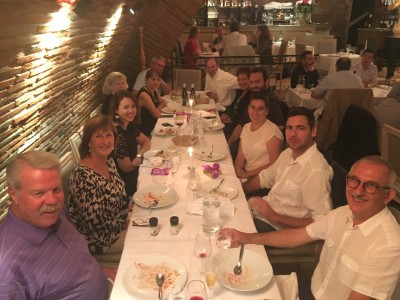 After lunch we did a bit more sight-seeing, then stopped at a wine bar for a pause. Still feeling a bit jet-lagged, everyone voted to return to the hotel for a short nap before dinner. For dinner, we had reservations at “Les Caves de la Maréchale” in downtown old Toulouse. Marie José had made reservations for 12 people. We had François and Nicole, their daughter Sarah and her husband Nicholas, Gilbert and Marie José and their two children Chloé and David, Roger and Dizela, plus Jill and I.

The three-hour dinner and companionship were excellent. Jill and I had the opportunity to renew our friendships – and Roger and Dizela to make new acquaintances.  Everyone at the table ordered the three-course prix-fixe meal for €35, plus a few bottles of wine and a round of aperitifs.  We all agreed that the meal was fabulous!

Back to the hotel, but unlike our first night, neither Jill nor I could fall asleep.  It was easily 3:00 or 4:00 AM before we were both asleep.  Bad night of jet-lag.