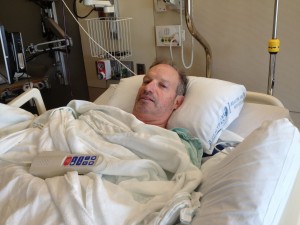 Henry Warner in the hospital room after the operation

Henry Warner slept peacefully until about 4:30 AM when someone came in to his room to draw blood.

The blood draw is done early in the day, so that the results can be available for the surgeon when making his rounds.  Dr. Pritchett popped into my room about 6:30 AM.  Keep in mind that this was now Saturday morning, so it was obvious he wasn’t staying home and sleeping in late!  He asked me how I was feeling.  Nothing else.  Luckily I had written down ahead of time about ten questions I had for him.  He sat down and answered each question.  When I announced I was done with the questions, he just got up and left the room.  Nothing else was said in the way of a “good luck” or “see you later”.

The male nurse came into my room about 7:30 AM to remove the catheter.  I had been told previously by a female nurse that the removal was “not too bad” as all that was going on was that the inflated catheter balloon was going to be deflated, then gently slid out.  Hah!  The male nurse asked me if “I was ready”?  This should have been a major clue.  I said I guess so, then he yanked it out like one would rip a bandage off a hairy leg.  Yowser!!!  This easily had to be one of the worst moments of the entire procedure so far.

For about a half an hour afterwards, I felt like I had to “go” badly, but there was obviously little to expel.  I was told that this feeling was quite normal, as the bladder control muscles were contracting back to their normal position.  I was also warned that the first time I urinated would likely produce a burning feeling, so I cringed in advance expecting the worst when I actually went for the first time.  Luckily, though, I felt no burning or even any discomfort.  I guess this made up for the “not too bad” prediction.

My next PT session had been scheduled for 8:00 AM.  Keeping in mind the 45 minutes food delivery wait, I ordered breakfast at 7:45, thinking that I would be done with PT before 8:30 and could then enjoy my nice hot breakfast of scrambled eggs, potatoes and coffee.  How does that go about the best laid plans of mice and men?  The physical therapist showed up at 8:30 AM, just as my breakfast arrived!  He mumbled something about his schedule showing an 8:30 appointment, while the schedule posted on my room board said 8:00 AM.  I was hoping he would say go ahead and eat, then we will do the PT.  But no, the breakfast was set aside to cool nicely.

He then assisted me in getting out of bed onto the walker.  I must state that getting in and out of bed is one of the hardest tasks immediately following this operation.  You are instructed to not bend more than 90 degrees at the hip.  Plus your leg has very little to no strength for lifting itself off the bed.  Then you are ever-mindful of exceeding a comfortable range of motion without incurring a stabbing pain.  The first few times in and out of bed I needed help.  Either the physical therapist or my wife would have to lift my operated leg, while I tried to scoot back and forth using my arms and lying nearly prone.

This time for PT, I actually left the room and walked up and down the corridor a bit.  Then we went into a room that had some steps set up as a simulator for the home environment.  At this point I transitioned to crutches because we had told the physical therapist that it was my intention to use crutches at home in lieu of a walker.  I had no problem negotiating the stairs, as I had practiced a bit at home prior to the operation.   We walked back to the room and I made my way, with assistance back to bed.  The physical therapist said I had done so well, that he was canceling the scheduled 2:00 PM second session.  He said Henry Warner had accomplished all the goals and no additional session was needed.

I still had an Occupational Therapy session scheduled for 11:15 AM.  In this session, I got out of bed again, then using only crutches, walked to the simulation room to practice getting in and out of a car and using a raised-height toilet seat.  I was able to perform the required operations without difficulty and was then pronounced fit for discharge.

We were totally packed up and out of the hospital by around 1:30 PM.  I should also mention that in terms of pain, I was still at about a 2 level.  The previous day I had been administered two 5 mg doses of oxycodone late in the afternoon.  I do not like taking oxycodone as it makes me feel “loopy”, so I then asked that my dosage be reduced to a single tablet.  I was given two more doses of 5mg each of oxycodone at about 6 hour intervals before being discharged.  So all together I only took four, 5mg tablets of oxycodone the entire time I was in the hospital.  I have not taken any more since.

After getting home, I practiced walking back and forth on two crutches.  I took two 500 mg acetaminophen and two 325 mg aspirin tablets in the evening for pain, but nothing more.  I have to admit that I did not feel tip-top.  I felt groggy and “off” with a mildly upset stomach, but no great pain.  My pain was still at perhaps just a 2 level, even on just the acetaminophen and aspirin.

I was getting a little worried that I had been eating heartily, but nothing was “coming out”.  I was urinating fine, but nothing regarding the bowels.  Supposedly this is quite common after being on anesthesia and oxycodone, but it is unusual for me.  I was warned by the nurse that the first time might be difficult.

I ended the first post-operation day by going to bed about 9:00 PM.  However, I had a rough time sleeping, plus I was having to get up about every two hours to urinate.  All I can think is that all that IV fluid was working its way out, as this is not my usual nighttime pattern.  Or perhaps the catheter had irritated my urinary track.  Or maybe both.  After the second time of getting up, I decided to crash on the recliner so as to not disturb my wife anymore, but I continued to wake up about every two hours to go to the bathroom.  I slept until about 8:00 AM, so all in all, I got quite a bit of rest, albeit in broken chunks.  The end of Henry Warner’s second day!