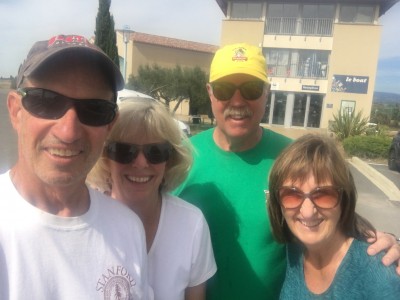 Homps is a tiny city east of Carcassonne where Canalous (the boat rental company) has a base.  There were a lack of public transportation options for getting to Homps from Carcassonne, so we elected to take a taxi, which ended up costing €70, which we concluded wasn’t too bad for four people and all our luggage.  Prior to the taxi ride I had been pronouncing Homps as “omp”, following the French custom of not pronouncing the “h” and generally not pronouncing the final consonant.  However, in talking with the taxi driver, I learned that the proper pronunciation was actually “omps”, with the “s” being sounded.  It’s like the French word “ours” – meaning bear, which is pronounced “urs”.  How does one know these things?  By trial and error. 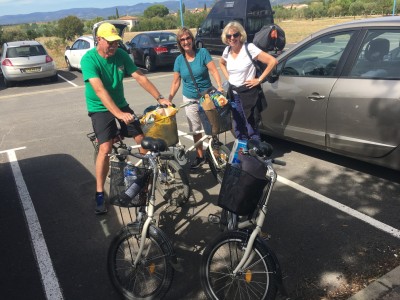 Back from the grocery store with all our provisions.

The cab driver knew exactly where the Canalous base was, as he told me he routinely took passengers there from Carcassone up to several times a week in the summer months.  During the ride I also asked him a little about himself and learned that he was single, owned his own taxi car and had no employees.  I also asked him about ride services like Uber and how they were impacting his business.  He told me that so far there was little competition in Carcassone and that he had developed a pretty good network of hotel contacts who would routinely call him for trips like ours.   I didn’t say anything, but couldn’t help wondering how long that would last. 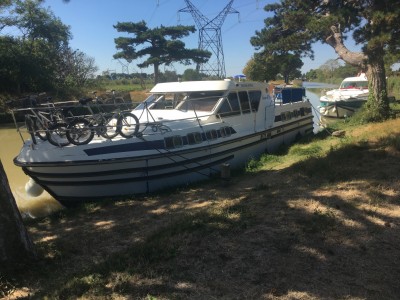 Our canal boat – the Buffalo Bill

We arrived at the Canalous base about noon, only to find the office closed, despite the posted hours on the door.  I called the office phone number and began speaking French.  The office manager informed me that he spoke English, at which point I told him that I preferred to practice my French.  He responded in French that he would be there shortly.  Subsequently, when we met him in person, he told us he was from England!  His English was indeed superb!  He told us that he and his family had been living and working in France for the past 18 years and that they greatly preferred southern France to England.  I asked him how Brexit might impact their lives and he responded that he did not think there would be much impact, as he was under the French pension system.

I should also mention that anyone contemplating a long-term trip to Europe (we are here for a month) naturally needs to think about their phone options.  We had switched to T-Mobile service in the US almost two years prior to the trip and we have been very happy with this choice, especially during our non-US travels to Canada, Mexico and Europe.  The T-Mobile plan automatically includes seamless coverage in these areas, so we are able to make calls and use our phones for Internet access without additional charges.  This contrasts with our former AT&T plan where our only international option was to buy a travel package that gave us very little for the money.

As we had done on our first canal boat trip, we left our bags in the Canalous office and were given our four pre-paid bicycles.  We then headed off to the nearby little town of Olonzac on our bicycles to a well stocked Casino grocery store.  As we purchased several bottles of wine and six large bottles of water, plus all the other basics, we were all pretty heavily loaded for the trip back to the boat base.  Our boat was still being readied for us, but we were allowed to load the refrigerator and freezer while we waited for the crew to finish. 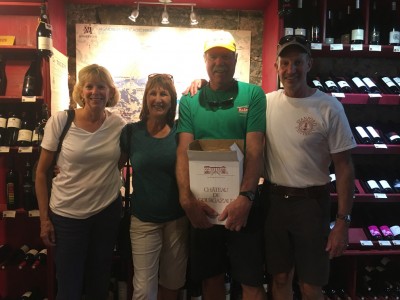 At the Homps Wine Cooperative showroom in the tourist office building

As we had time, we elected to ride our bikes to the local tourist office.  We discovered that the building housing the tourist office was co-located with the town’s wine cooperative, where a very engaging young French lady poured us samples of the local production.  We liked most of what we sampled and ended up buying a few more wine bottles to add to our stock. 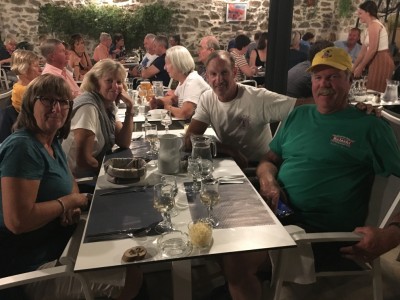 For our first night, we had previously decided to spend it at the Canalous base in Homps.  Our reasoning was that it would be late in the day before we could depart and there are a series of locks immediately to the east of the base, which was the direction we were heading.  We discovered that most of the other boats being picked up that day had decided likewise.  The two boats on either side of us had late-night revelers, particularly the boat with our new Czech Republic friends.  They were a friendly, outgoing bunch that liked to laugh a lot and interact with us.  We learned that the group of eight had previously done several French canal boat trips.  They were headed to the same destination base at Carnon, France that we were, but they were doing a one week trip as opposed to our two weeks.   We passed each other a couple of times the next two days, as they had a freshwater pump issue and had to stop to wait for repairs.  Every passing involved a lot of cheering and hand-waving from both boats! 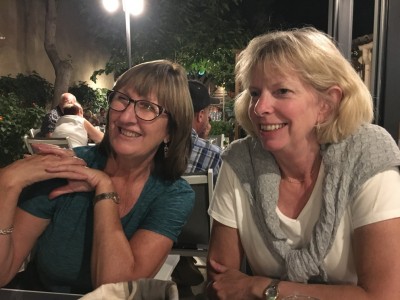 Dizela and Jill at Le Peniche for dinner.

For dinner, we walked across the canal footbridge next to the boat base and ate at Le Peniche.  We ordered escargots for appetizers, anticipating that this would be the first of many such delicacies.  Little did we know that we would never ever see them again on a restaurant menu during our trip.  Nevertheless, it was a great meal that we thoroughly enjoyed.  Everything was off to a great start!

Back at the boat, all the talking and noise died down about 1:00 AM and it was off to bed for Jill and I in the forward cabin of our Tarpon 42 Prestige.  Our Czech friends were up early the next morning, though, about 8:00 AM – wine glasses in hand!