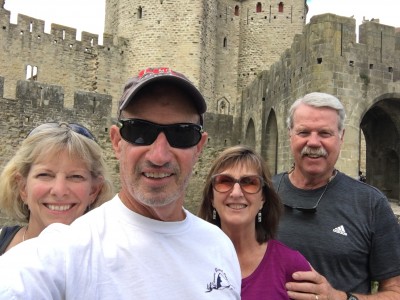 Jill, Henry, Dizela and Roger outside the Carcassone walls.

Before checking out of our hotel, François dropped by to deliver a gift bottle of wine.  We departed Toulouse the morning of Friday, September 14, 2018 by train around 10:00 AM. The trip to Carcassone was advertised to be about an hour and 15 minutes, but ended up taking about a half hour more on the standing-room-only train.

Jill and I had visited Carcassone before, but Roger and Dizela had not. As I have blogged previously, Carcassone is an impressive walled city with a very long and storied history. The origin of the city is pre-Roman and the city has been added to and modified through the ages.  Carcassone was occupied by many conquerors, including the Romans, Visigoths, Franks, and Saracens.  It was a strategic, important military base throughout the Middle Ages.  By the middle 1600′s, however, Carcassone lost its military significance as France consolidated and the Cité and thus began its decline. 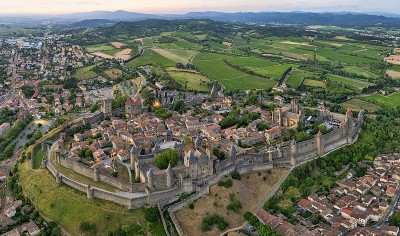 By the mid-1800′s, Carcassone had fallen into grand disrepair and was even being used as a handy source of pre-cut stone blocks for new construction elsewhere.  Luckily a group of French visionaries were able to convince the French government to halt the destruction and embark on a huge restoration project that lasted over 60 years.  During the reconstruction, the Cité was restored to what it may have looked like during the reign of Louis VIII around the year 1200.  The model for the restoration was based on a single painting that was in existence at the time. 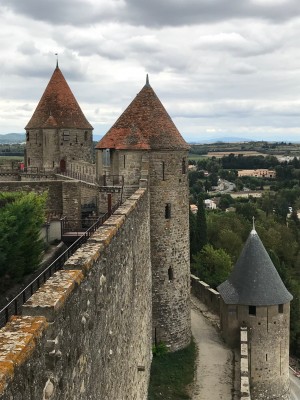 So even though the Cité was “restored”, much of what now exists is original, including some Roman walls and towers.  It is a magnificent wall city – one of the grandest in Europe – and it is easy to walk the streets and imagine what life might have been like for the ancient inhabitants.

A few words of disclaimer:  while I recommend Carcassone for its grandeur, architecture and construction, the Cité can be overrun with tourists.  Also, many of the shops sell the standard low end tourist merchandise – plastic swords, T-shirts, etc.  Try to look beyond this.  Imagine instead a sieging army camped outside the walls.

We spent all afternoon exploring the Cité, including a highly recommended walk along the ramparts (paid fee required).  The ramparts tour includes access to the fortified palace within the city walls, the museum and a short film about the history of Carcassone and its restoration.

We exited the Cité via the western gate and strolled along the restaurant-lined street looking over the dinner menus.  Another recommendation: for a better value, eat dinner outside the walls of the Cité.  We all enjoyed a delightful meal eating outside on a pleasantly warm evening.